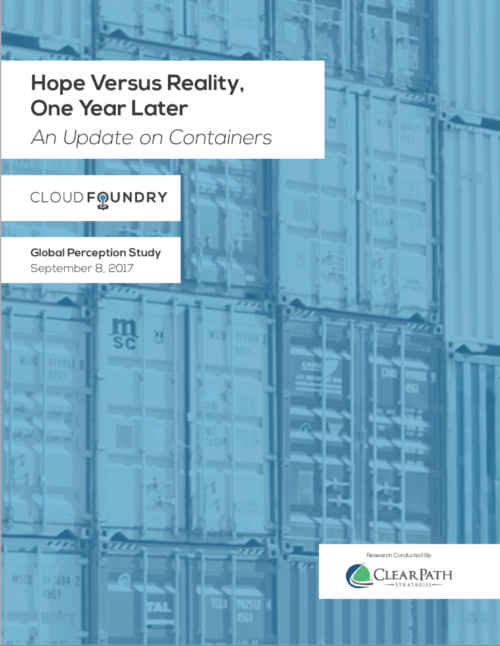 SAN FRANCISCO — September 8, 2017 — Despite continued buzz for the potential of containers, only 25 percent of enterprise companies actually use the technology in production, a negligible rise of only 3 percent from 2016, according to Cloud Foundry Foundation’s Global Perception Study.

Home of the industry-standard platform for cloud applications, the Foundation surveyed more than 540 enterprise developers across different industries.

“In the 2016 Container Report, we saw the excitement around containers and their potential —yet this excitement was constrained by the complex challenges of deploying, managing and orchestrating containers at scale,” said Abby Kearns, Executive Director, Cloud Foundry Foundation. “In our follow-up one year later, we see the same steady growth in interest but actual adoption of containers has still failed to accelerate. We believe the gradual or even glacial adoption of containers in production reflects more on the central challenge we pointed to in the 2016 Container Report—the challenges of container management are real, and loom larger at scale.”

In 2016, there were few enterprise-ready solutions for managing Docker containers. Arguably, there were no good enterprise-ready options that were not a provider-managed container service or a PaaS. In 2017, 53 percent of companies using containers were managing their containers with either a container service, like AWS EC2 or GCE, or a provider-managed PaaS, like IBM Bluemix or Microsoft Azure. Only 15 percent were using self-managed container orchestration tools. Of that group, 27 percent were using CoreOS Tectonic (commercial Kubernetes distro), followed by Hashicorp Nomad, Docker Swarm and Mesos, each around 20 percent. None were using open source Kubernetes on their own.

There is also a growing consensus in the tech community that Kubernetes adoption is indeed on the rise, displacing both Mesos and Docker Swarm among self-managed container orchestration tools. Looking at secondary metrics, such as Google Trends, as any indication, interest in Kubernetes has increased by nearly 200 percent in a year, while Docker Swarm’s has increased by 66 percent and Mesos by zero percent.

Cloud Foundry is an open source technology backed by the largest technology companies in the world, including Cisco, Dell EMC, Google, Hewlett Packard Enterprise, IBM, Microsoft, VMware, SAP and SUSE, and is being used by leaders in manufacturing, telecommunications and financial services. Only Cloud Foundry delivers the velocity needed to continuously deliver apps at the speed of business. Cloud Foundry’s container-based architecture runs apps in any language on your choice of cloud — Amazon Web Services (AWS), Google Cloud Platform (GCP), IBM Cloud, Microsoft Azure, OpenStack, VMware vSphere, and more. With a robust services ecosystem and simple integration with existing technologies, Cloud Foundry is the modern standard for mission critical apps for global organizations.

To learn more about containers’ role in the enterprise and their relationship to the Cloud Foundry ecosystem, attend Cloud Foundry Summit Europe in Basel, Switzerland, on October 11 and 12, 2017. Register here.