Prior to using Cloud Foundry, 65% of survey respondents indicated it took 1 to 6 months or more to develop and deploy a cloud app. That changed dramatically with use of Cloud Foundry technologies with 69% responding that the time period was reduced to between 1 day and 3 weeks. 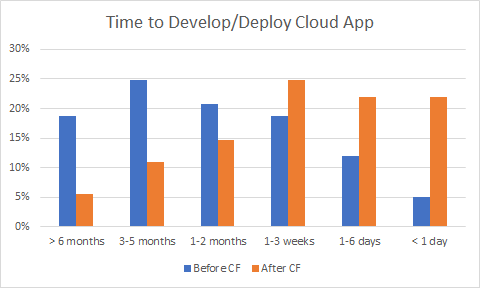 The survey also revealed the rising popularity of Kubernetes very much in sync with Cloud Foundry’s new direction toward Kubernetes. 57% of participants reported that they were already using Kubernetes and Cloud Foundry together.

The survey respondents are very engaged with Cloud Foundry: 64% indicating they consider themselves to be part of its community; 33% reported they are contributing to the initiative; on average, they are spending 47% of their time dedicated to Cloud Foundry related work.

A profile of survey respondents shows that wide usage of Cloud Foundry within large enterprises: 66% of respondents work for organizations with 1,000 or more employees (25% of the total work for organizations with over 100,000 employees);. 44% report broad deployment across either their entire company or are working towards that. Another 24% of respondents report limited rollout — either broadly used within specific business units or more generally in early stages of rollout.

The survey received a total of 176 valid responses, 63% of whom identified as either full time software developers or as being in mixed development and operations.

Cloud Foundry is an open source technology backed by the largest technology companies in the world, including Google, HCL, IBM, SAP, SUSE, Swisscom, and VMware and is being used by leaders in manufacturing, telecommunications and financial services. Only Cloud Foundry delivers the velocity needed to continuously deliver apps at the speed of business. Cloud Foundry’s container-based architecture runs apps in any language on your choice of cloud — Amazon Web Services (AWS), Google Cloud Platform (GCP), IBM Cloud, Microsoft Azure, OpenStack, VMware vSphere, and more. With a robust services ecosystem and simple integration with existing technologies, Cloud Foundry is the modern standard for mission critical apps for global organizations.

The Cloud Foundry Foundation is an independent non-profit open source organization formed to sustain the development, promotion and adoption of Cloud Foundry as the industry standard for delivering the best experience for developers to companies of all sizes. The Foundation projects include Cloud Foundry, KubeCF, cf-for-k8s, Eirini, Project Quarks, BOSH, Open Service Broker API, Abacus, CF-Local, CredHub, ServiceFabrik, Stratos and more. Cloud Foundry makes it faster and easier to build, test, deploy and scale applications, and is used by more than half the Fortune 500, representing nearly $15 trillion in combined revenue. Cloud Foundry is hosted by The Linux Foundation and is an Apache 2.0 licensed project available on Github: https://github.com/cloudfoundry. To learn more, visit: http://www.cloudfoundry.org.