Results and Recap from the Cloud Foundry Summit Hackathon

Early on the first day of Cloud Foundry Summit, a diverse team of intrepid coders gathered for the first ever Summit Hackathon, generously sponsored by VMware. These Cloud Foundry experts from around the world began the day caffeinating and contemplating:  what interesting project could they accomplish in less than 48 hours that could extend or enhance the current functionality of this critical platform? IBM’s Dr. Max (Michael Maximilien) served as our congenial emcee for the day, and soon had the group broken up into teams with notional project areas so the real head-scratching could begin. 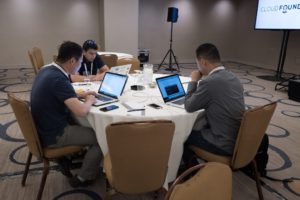 VMware set the bar high for success with fun prizes and swag for the teams, but the hard work still had to be done to manage those project ideas into demoable prototypes that would be evaluated the very next day. Seven teams hit the ground running, working quickly to move from broad ideas to pilot implementations that could lead the way for future Cloud Foundry projects to make the platform even more useful for enterprises around the globe.

Participants spent Tuesday working closely together, continued their work the following day while juggling Summit sessions and events, and finally gathered for judging on Wednesday afternoon. The judging committee consisted of Dr. Max of IBM, Brad Meiseles of VMware and Chris Clark of the Cloud Foundry Foundation, who absorbed as much as possible from participants’ impressive presentations in order to make the final determination — which of these intriguing projects could have real impact for the Cloud Foundry community?

Carrying first place was a team of VMware and IBM developers who devised an approach to a serverless Cloud Foundry architecture done right. Ultimately, this “hot topic” was selected over some very impressive projects that, among other things, pre-compiled BOSH releases as a service, automated BOSH release creation from various Debian packages, and provided a Cloud Foundry buildpack discovery service across multiple organizations. 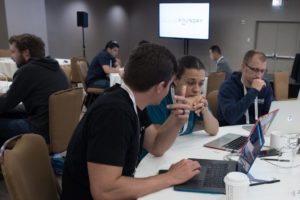 It was generally decided that a clear approach to serverless architecture on Cloud Foundry offered the broadest community benefits and had the greatest potential to become an incubating project.  Our 2nd place finishers, team BCRaaS, created an excellent acronym as well as a valuable service which could save developers a ton of compile time by storing pre-compiled BOSH releases in an S3 bucket.  Congrats to all our winners and thank you to everyone who participated and VMware for making this all possible! 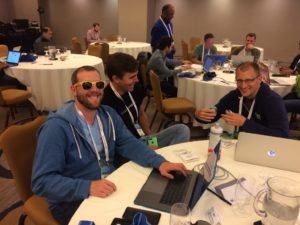 Chris is the Technical Operations Manager at Cloud Foundry Foundation with a background in software engineering and project management.
SEE ALL ARTICLES

Results and Recap from the Cloud Foundry Summit Hackathon