Updating ASG Definitions Across Thousands of Apps with ZERO Restarts!

Update: This post has been updated to reflect changes to Dynamic ASG behavior as of cf-networking-release v3.10.0 and capi-release v1.131.0.

One of the most important things people can do to secure their Cloud Foundry environment is to restrict apps that run on it, from communicating freely over the network. This can prevent hacked applications from downloading malicious software to run in the container, and also limit the scope of what a compromised application might affect internally.

To accomplish this, Cloud Foundry offers Application Security Groups (ASGs). ASGs are sets of network Access Control Lists (ACLs) that Cloud Foundry will apply to traffic egressing app containers. They allow operators to permit access from applications to only the things the application needs to function properly, and deny access to anything else. Each ASG contains a set of rules to apply, based on IP, port, protocol. If an app doesn’t have an ASG rule covering a particular connection, it is  blocked. For more information, take a look at Cloud Foundry’s ASG documentation.

Static ASGs Are Difficult to Manage at Scale

Only administrators of a Cloud Foundry environment can manage ASGs or update how ASGs are bound to applications. Until now, those updates would not take effect in running containers until applications were restarted/restaged with a `cf restart` or `cf restage` task. As a result, enforcing the proper security posture of an app container requires two personas – the admin to update/apply the ASG, and the developer to restart the application safely.

This issue gets compounded greatly when admins make changes to default ASGs that apply to all apps on the platform. Getting every dev team to restart their app to ensure security compliance can be a large hassle, especially as the platform grows to host thousands of developers and apps.

locked down as desired. At the same time, it was difficult for developers to determine if changes to rules had been applied to their applications or if any rule changes would occur on the next restart.

Let’s look at this first from the operator’s perspective:

Dynamic Updates Save the Day!

Dynamic ASGs provide a solution to these problems by continuously updating the rules of running containers based on what is defined in the Cloud Foundry API.

Prior to implementing Dynamic ASGs, the data flow from defining an ASG to it becoming an IPTables rule on a running container looked like this: 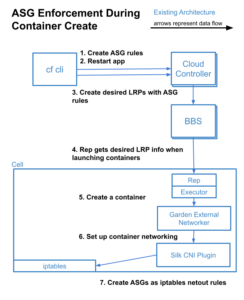 In the initial iteration of Dynamic ASGs, the above data flow still occurs, but with a few changes, and additions. Overall, it is fairly similar to how container-to-container `network-policies` are applied: 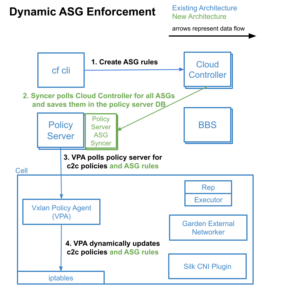 Dynamic ASGs are the Default Now

As of cf-deployment v20.0.0, Dynamic ASGs are enabled by default. Simply upgrade your Cloud Foundry environment to that version, or later, and VPA will automatically start applying ASG data to live containers on a minutely basis.

In order to disable dynamic ASGs, Cloud Foundry should be re-deployed using the disable-dynamic-asgs.yml ops-file from cf-deployment.

Dynamic ASGs Have a Performance Impact

While we have designed Dynamic ASGs to be highly scalable, there are some bottlenecks in the current implementation to be aware of, dials that can be adjusted, and metrics to watch.

UPDATE: As of cf-networking-release v3.10.0 and capi-release v1.131.0, `policy_server_asg_syncer` polls a new endpoint to determine if ASG info has changed prior to attempting a sync. This vastly mitigates the Cloud Controller memory concerns described here.

The periodic syncs of ASG data into Policy Server exacerbates a memory leak in Cloud Controller. The rate at which this occurs depends on both the total size of the total ASG ruleset (number of ASGs and total of all the rules defined within), and frequency of polling.

There is a maximum memory limit defined in `monit` for the `cloud_controller_ng` process that triggers a restart after it reaches approximately 3.5GB of memory. Because of `api` node redundancy, there should not be an impact to the CF API as a result of this, but it is something to be aware of.

Based on our testing, we estimate that a Cloud Foundry environment with 5 `api` VMs, a 60 second polling interval, and a 2MB ASG dataset to trigger a `cloud_controller_ng` restart once every 3 days.

While we iterate on the Dynamic ASGs architecture to eliminate this behavior, the two most effective ways to mitigate this if `cloud_controller_ng` restarts are causing issues are to increase the number of `api` VMs in your deployment, and/or increase the `policy-server`’s polling interval.

Due to the internal design of IPTables, Cells with extremely large IPTables rulesets (>150,000 rules per Cell) will experience additional load when trying to update and manage all of those rules.

Sync times between VPA and Policy Server will increase, and VPA’s CPU usage on Cells will increase. This behavior is most apparent during activities similar to rolling restarts of Cells, where there are lots of auctions happening, and changes to what apps are running on each Cell.

Based on our testing, significant performance hits will be seen at >150,000 rules per Cell. When rules per Cell exceeds 500k, there is the potential for  process queue saturation to cause the Cell to become completely unresponsive.

We highly recommend having fewer than 150,000 IPTables rules per Cell, by reducing the number of apps per VM. Additionally the polling-interval between VPA and Policy Server can be adjusted to keep the polling interval greater than the time it takes VPA to synchronize the rules.

We believe these to be very extreme cases, so If your environment requires more than 150,000 rules per Cell, please reach out to us with your use-case, so we can assist!

Based on the above points, you would recognize that there are a number of ways that Dynamic ASGs work to improve Cloud Foundry:

You can get started with Dynamic ASGs by upgrading to cf-deployment v20.2.0 or later. To refer to conceptual documentation about ASGs in, please click here. More in depth documentation on how Dynamic ASGs function is available here. 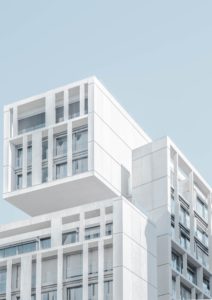 Video: Serverless Made Easy on Azure with Cloud Foundry